Tarana Burke in Conversation with Miabelle 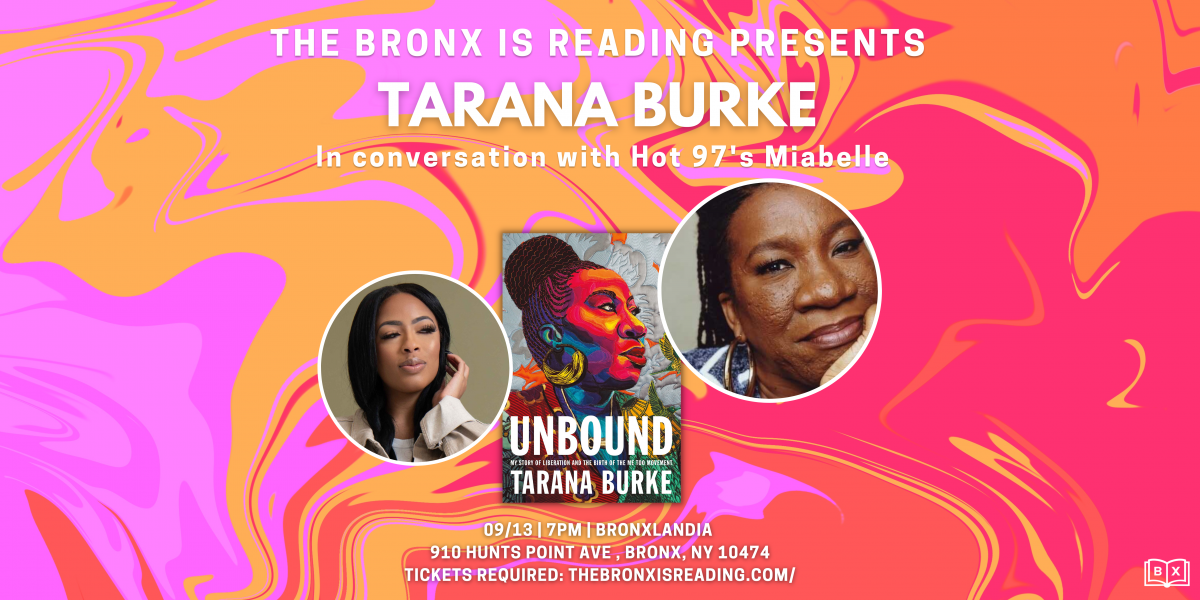 Join Bronx native and #MeToo founder Tarana Burke in conversation with Hot 97's Miabelle at Bronxlandia where they'll be discussing the paperback release of Burke's memoir, Unbound on Tuesday, September 13 at 7:00 PM. There will be a live DJ, and Drinks available for purchase by The Boogie Down Grind. Tickets are $10.00 (purchase below) and required to attend, proof of vaccination encouraged.

Tarana Burke is a a proud native of the Bronx, NY, with a passion for community organizing, which began in the late 1980s, when as a young girl, she joined a youth leadership organization called 21st Century Youth Leadership Movement. She led and participated in initiatives around issues like police brutality, housing inequality and economic justice across the city. That work, coupled with a desire to deepen her academic education and organizing skills led her to Alabama State University, a historically black institution. In 2005, she created Just Be, Inc., an organization committed to the empowerment and wellness of black girls. The ‘me too.’ Movement was born shortly thereafter as an entry to healing for survivors and a mechanism for developing survivor leaders. In 2017, when ‘me too.’ as a hashtag (#metoo) went viral, Tarana emerged as a global leader in the evolving conversation around sexual violence. In 2018, Tarana founded ‘me too.’ International, a global non-profit organization that serves as a container for the vision and framework for the ‘me too.’ Movement. Her steadfast commitment is what led her to receive numerous accolades including 2017 TIME Person of the Year, 2018 TIME 100 Most Influential People, the 2019 Sydney Peace Prize and Harvard Gleitsman Citizen Activist Award, and in 2020 being named one of USA Today’s Women of the Decade among many other honors and recognitions.

Miabelle is a New York City based writer/host/producer with a love for arts and culture. Her experience has ranged from providing exclusive content to community newspapers, and major digital + print publications such as Complex Media, Vibe Magazine, HOT 97/WBLS, and more! Miabelle also works as a freelance editor for both fiction and non-fiction literature as well as utilizing her voice for commercials and on-air segments .

This is a ticketed event, you must purchase a ticket to attend.

Unbound: My Story of Liberation and the Birth of the Me Too Movement (Paperback)

“Sometimes a single story can change the world. Unbound is one of those stories. Tarana’s words are a testimony to liberation and love.” —Brené Brown